Who's Got AU Spirit?

Who's Got AU Spirit? is a downloadable card game that is based upon the Top Trumps format. It will be released in late 2015.

The game was announced on the 10th of May 2014, and a teaser poster was posted onto the wiki. It will be a free online printable that can be printed off from the wiki, and it will feature thirty characters (including the four lead characters). It will be based upon Top Trumps, and will have a similar game play, including score categories. 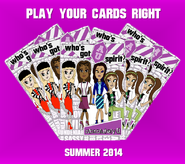 The game was caught with several delays, notably a slow and tedious production method. The game's presentation also clashed with the upcoming Be Undeniable campaign. Eight months after the announcement, Burton confirmed the new release of the game for late 2015.

The game is played with at least two players. Each player gets an equal amount of cards, and the first player will read out a category on their first card (on the front of the deck) one of the following:

The categories are in a range of 1-100 except for Social Rating, which is a 1-10 scale. After the first player reads out the category and their cards' score, the other players read out their scores for that category. The player with the best scoring card wins, gets the other players' card that they had just used (putting all of the used cards at the bottom of the pile, and reads out a category from their next card. This continues on until all of the cards are at the hands of one player, who is the winner.

In the event of a tie, the cards with the tied score are placed in the centre. The same player reads out a category from their next card, and the winner of that round gets the cards in the centre also.

Community content is available under CC-BY-SA unless otherwise noted.