The official Absolutely U. Tumblr was launched in February 2015.

The purpose of this blog is to promote the Absolutely U. franchise and its' campaigns.

In the inception of the blog, the hashtag #beundeniable was used in the heading and in many of the posts, relating to the 2015 campaign that would launch later in the year. The Tumblr blog would primarily support this with hints, teaser images and content that would eventually reveal the campaign. In 2016, teasers leading up to the reboot were posted sporadically. On March 28th 2016, the blog got a makeover to represent the new look, including the new logo and background.

As of April 2016, the icon for the blog is the hexagonal 'U.' icon upon the lined paper background used throughout the reboot campaign. However, on the night after the Orlando attacks in June 2016, the icon temporarily changed its usual purple colour for the colours of the rainbow flag. 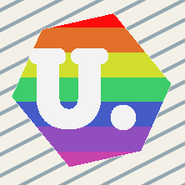 Retrieved from "https://absolutely-u.fandom.com/wiki/Tumblr?oldid=5592"
Community content is available under CC-BY-SA unless otherwise noted.