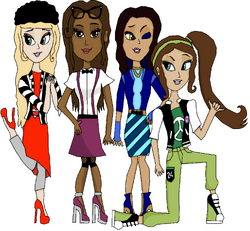 Omega Nu Zeta (ΩNZ)is a sorority which is part of Absolutely University.

Omega Nu Zeta was formed when Norah Cardew joined Absolutely University, and met the other members. They got together when Norah was not around and asked Quinn Lawson to form a sorority consisting of them. She agreed and the girls moved in, forming the sorority.

The colour scheme of the sorority is purple with white lettering.

The Omega Nu Zeta girls in 2.0 fashion
Add a photo to this gallery

Retrieved from "https://absolutely-u.fandom.com/wiki/Omega_Nu_Zeta?oldid=5037"
Community content is available under CC-BY-SA unless otherwise noted.