A new promotional website named Meet the New U. was released on April 10th 2016 to introduce the 2016 reboot of Absolutely U.

On April 9th 2016, an image was posted on the front page of the wiki to advertise the opening of this website, featuring artwork of the redesigned Norah Cardew: 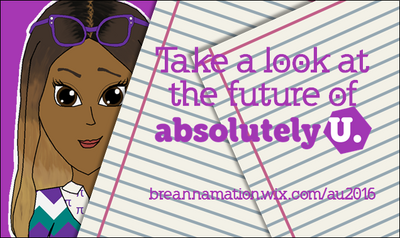 The next day, on April 10th, the 30 second trailer for the reboot, which also promoted the website, was posted on the official Tumblr.

The website, made on the Wix engine, begins with the lined-paper background, the text 'Unleash undeniable' and a 'cut-out' of the redesigned Norah Cardew. After this, a 30 second trailer is embedded to promote the site.

Next, the reasoning for the reboot is explained, while the new artwork of the main four characters is displayed. Next, a group image of eight characters - five returning, three new - are displayed, leading into text promoting the new body types and enhanced diversity. Finally, a link is displayed to take users to the official Tumblr.

Several details of the reboot were announced, including

Priya Watson
Add a photo to this gallery

Five new students were also confirmed, though thus far there have not been names provided for some of them.

On Friday 15th July, the short African-American boy character was confirmed to have the name Aubin Slattery via a Tumblr post.

Retrieved from "https://absolutely-u.fandom.com/wiki/Meet_the_New_U._(website)?oldid=5651"
Community content is available under CC-BY-SA unless otherwise noted.